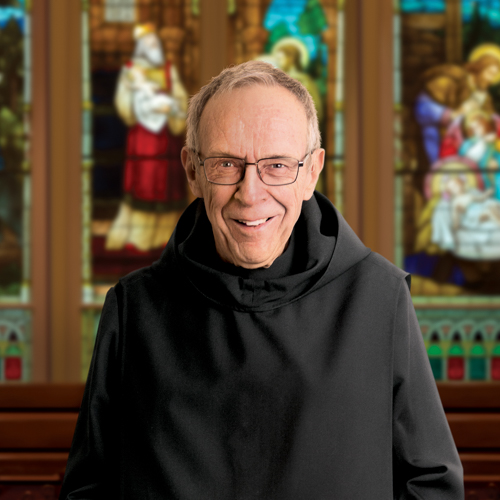 “I grew up at the foot of the abbey,” says Abbot Peter. “It was a very Catholic town. Everybody knew everybody else. Our parish was Benedictine. I began (studying at Mount Angel Seminary) as a kid right out of grade school—at about age 14.”

Abbot Peter attended his community’s high school, followed by two years of college. In the summer of 1961, he officially entered the monastery, and he professed final vows four years later. He was ordained as a priest in 1968 and spent a couple of years in parish ministry before pursuing graduate education. From 1973-1976, he studied in Rome, ultimately receiving a Doctor of Sacred Theology.

Upon returning to the United States in 1976, Abbot Peter began teaching at Mount Angel Seminary, which is run by his religious community. Since then, he has continued to teach at least one or two classes a semester—even as he has ministered in various other roles. From 1988 to 1997, he served as abbot of his community. In 1999, he was elected the abbot president of the Swiss-American Benedictine Congregation, which is a federation of Benedictine religious communities from North and Central America. “It’s more of a highfalutin title than the actual job,” he says, jokingly. “Benedictine monasteries are pretty autonomous. I remained active here in our seminary at the same time.” He served two terms, from 1999-2011.

For the last several years, Abbot Peter has ministered as a formation director in the seminary. As such, he works with about a dozen students at a time, guiding and supporting them as they pursue their own priestly vocations. “I’ve been around a bit,” he says. “I’ve gone through some of the same things they struggle with, so hopefully I can share those experiences and offer them insight as they go forward.

“I have lived in the monastery a long time and have become enmeshed in this life. That routine keeps me going. We all need anchor places in day-to-day life. Prayer is my anchor place. One thing the coronavirus pandemic has taught us is—whether we like it or not—we’re not in control. We have to have faith in God, but more importantly, we have to have hope. We have to hold onto hope.”