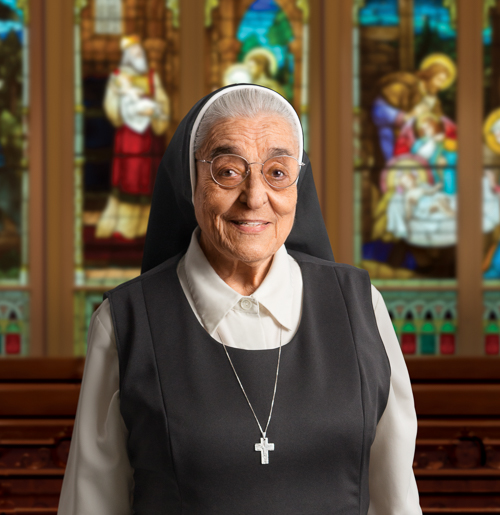 Yet the possibility of becoming a sister was always in the back of her mind. When her brother began preparing for the priesthood, she started to consider religious life more seriously. “It was a Sunday, and I was coming home from Mass with a book our parish priest had given me,” says Sister Alice. “The book asked, ‘What are you doing with your life?’ I felt called to at least go and find out. I was anxious to discover what God wanted for me.”

Sister Alice entered her community in 1954 at the age of 24. “I was the grandmother of the novitiate,” she says, laughing. “When I rang that doorbell, the first thing I saw was the Sacred Heart of Jesus statue with Jesus’ arms outstretched. I knelt down and said, ‘I’m home.’ God has been my life ever since.”

During her years of formation, Sister Alice provided domestic assistance for the nearby Missionary Oblates of Mary Immaculate. In 1957, she began her education ministry, serving as a teacher for 34 years and a principal for 7. For most of these years, she taught at Mount Sacred Heart School for Boys (now Mount Sacred Heart School), an institution founded by her religious community. During the summers, she taught in various missions around Texas. “The first mission I went to was in Austin,” she says. “The good Lord tested me with 75 first graders. The school was an old church, and it had a little closet with books. Whenever I was overwhelmed, I would slip into that little room to pray. I always felt the (Holy) Spirit with me.”

Sister Alice finally retired at age 85. “It (religious life) has been tiring sometimes,” she says. “But I’ve always said, ‘Ok, that’s what the Lord wants me to do. I’m going to do that.’ My motto is to smile no matter the trial. I always have a song in my heart.”