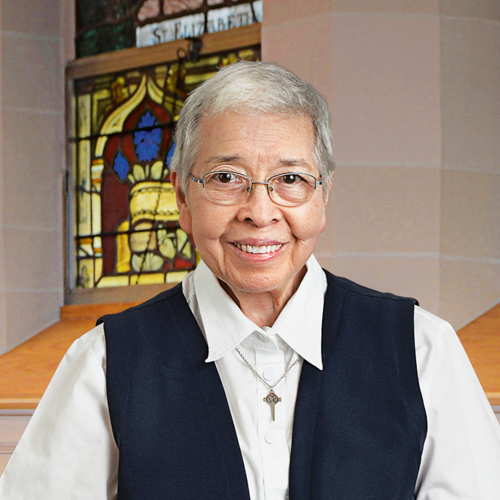 “We are not asking for money for ourselves but rather to go on and do the work that God has put us here for,” says Sister Ann Martinez, 82, a member of the Marianites of Holy Cross in Covington, Louisiana. “We never entered our community thinking we would make a fortune. We entered always to do good for others.”

Sister Ann has been a sister for 65 years. Born in New Orleans, she grew up in the Marigny as a member of a faithful family. As a girl, she attended Catholic schools led by the Marianites of Holy Cross.

“The Marianites encouraged me to do the best that I could with the gifts God gave me,” she says. “They were all I knew. My mother and her sisters were taught by the same order. The Marianite influence had the most significant impact on the direction of my life.”

Sister Ann is fond of saying, “God puts you where God wants you.” And she has seen his leading throughout her life. After attending the movie, “The Bells of St. Mary’s,” Sister Ann shares, “I realized that religious life would be a good thing for me.”

With that she joined the only community she had ever known, the Marianites of Holy Cross, in 1957. She ministered for many years in the field of education as an elementary teacher in the New Orleans area, a biology teacher at the Academy of Holy Angels, and at Our Lady of Holy Cross College (University of Holy Cross) as a science instructor, director of academic advising, and registrar.

“At one point, I ran into a recruiter in the airport who was part of the Air Force National Guard. I investigated it, and after receiving permission from my community to join, I went to basic training for six weeks,” she explains. She served six years as an optometry specialist with the Louisiana Air National Guard.

Later she joined the Willwoods Community, a nonprofit organization in New Orleans, Louisiana, where she served for 14 years as the administrative assistant to the president.

Now retired from Willwoods, Sister Ann reflects on all the people she has met in her life, “people with such gifts who shared those gifts with me and encouraged me. Those memories stand out like a blanket that covers me.”

Today, she resides at Chateau De Notre Dame in New Orleans with other Marianites.

Sister Ann reflects on the key to a long life, “The most important thing is to be grateful for the life that you have been given and to take life as it comes, one day at a time.” She notes, “I can’t do anything more than thanking God for being there every step.”