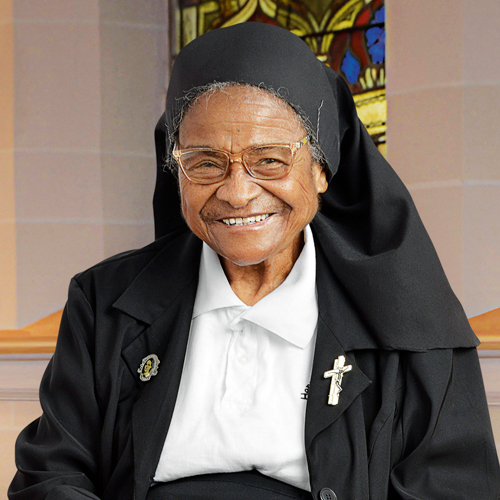 Sister Joan Flores has been a member of the Sisters of the Holy Family in New Orleans for more than 60 years. She was born in Belize where her father was a teacher and worked alongside missionaries.

“The Jesuits were the main missionaries at that time and went from village to village,” she says. “In each district, they had a house for the [lay] teachers. We traveled around with my father and lived in different parts of the country. I was able to see different cultures.”

By the time Sister Joan was a teenager, she, her parents, and her six siblings had settled in the southern part of the country. In high school, she met the Sisters of the Holy Family. “The sisters would visit people, especially after Mass,” she recalls. “They were very kind. I was drawn to what I saw.”

“My greatest inspiration to religious life was our principal, Sister Joseph Xavier,” she says. “She was a lovely woman and very devoted—a holy person.” After graduating from high school, Sister Joan decided to join the community. In 1959, she traveled to the United States to enter the novitiate.

Following her juniorate training, she ministered in Catholic education for roughly 40 years—both in the United States and in a high school in Belize that was run by her community. While she taught at all grade levels, she especially enjoyed working with the younger grades and has happy memories of preparing her students for their First Holy Communion. “The little ones learn so quickly,” she explains. “They are so eager to learn about God.”

After retiring from teaching in 2005, Sister Joan began assisting with the elderly members of her own community. She also volunteered at a nearby preschool and kindergarten. Today, she continues to help with various activities at her community’s motherhouse, where she resides. “Even though you are retired, you still have duties,” she explains.

Throughout her religious life, she has drawn strength from living out her faith and from the example of special sisters who inspired her with their prayer and dedication. “Life is an up-and-down thing,” she notes, “but they were steady and devoted.

“The most important thing is to say your prayers and don’t hold grudges,” she says. “Learn to forgive because no one is perfect. Try to love everyone. Be kind to everyone because we are one big family—God’s family.”