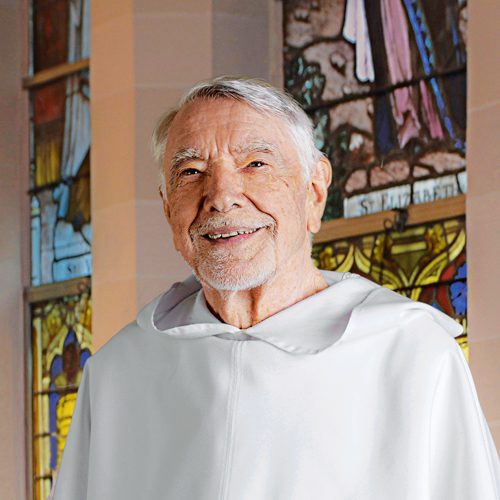 “The religious have been blessed to share their lives in service to the church and the world,” says Father Bertrand Ebben, 90, a member of the Southern Dominican Province of St. Martin de Porres in New Orleans, Louisiana. “We, in turn, are grateful to the donors for all they make possible through their blessings.”

Born in a town called Little Chute, Wisconsin, Father Bert, as he is known, recalls how the Catholic faith and the Dominican influence played a role in his formative years. “I grew up in a small town of Dutch immigrants founded by a Dutch Dominican.”

Father Bert was introduced to religious life primarily through his faithful parents. He attended Catholic primary and high schools and later traveled to Dubuque, Iowa, where he attended Loras College.

“Somehow, the Lord got a hold of me,” says Father Bert. He notes, “The Dominican sisters that taught me inspired me with their spirituality and love for scripture.” He entered the Dominican community in 1952.

After being ordained, he was sent immediately to West Africa, where he spent most of his ministry working in Nigeria. He spent his days ministering to the people and establishing the Church structure there.

Father Bert notes, “It was a gift to establish a province in a mission country and to meet people at the intersections of faith.”

In the late 1970s, Father Bert was elected to provincial leadership and established a new province of the order in New Orleans, Louisiana. He spent the last several years working in human development.

Today, Father Bert lives in the provincial house in New Orleans. There, he volunteers three days a week at a homeless shelter. He notes, “I am right where I belong at this time. The work can be very exhausting, but beautiful. I weep with those who weep.”