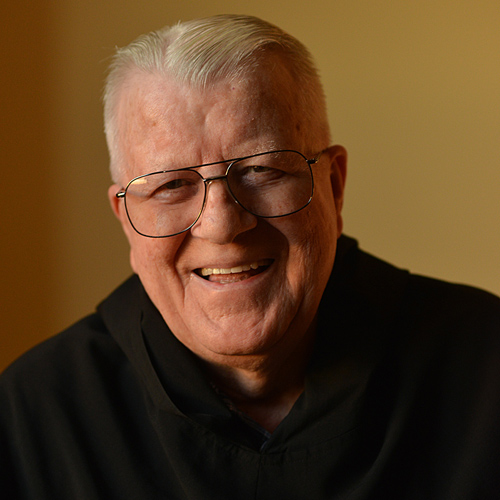 Originally from Galway, Ireland, Father Thomas Greaney entered  the Order of Friar Servants of Mary (Servites) when he was 24 years old. At the time, he’d already been working for a few years, but, as he says, “I was looking for something to get more involved.” The seed for his vocation had no doubt been planted years earlier. “I remember the Servites coming to school and talking about vocations,” he recalls.

Father Thomas entered religious life in 1961 and came to the United States in 1964 for further studies and formation. Although he was ordained in his home diocese in Ireland, he returned to the U.S. to begin his ministry. He taught high school for 12 years and served for two years in formation before moving into parish ministry.

For many years, Father Thomas served as associate pastor or pastor for parishes in the Chicago area, New Jersey, and later in New Mexico. “Parish ministry for me was a time when I got to know people from different walks of life and learn their insights,” explains Father Thomas. “I enjoyed that.” He was also active in the Rite of Christian Initiation of Adults (RCIA) program. “It was exciting to work with adults coming into the Church,” he says.

Today, Father Thomas resides with fellow friars at Our Lady of Sorrows Monastery in Chicago, Illinois. Despite various health challenges, his goal is to live the best way possible every day. “Be open to surprises and the unexpected, realizing that God is journeying with us,” says Father Thomas.