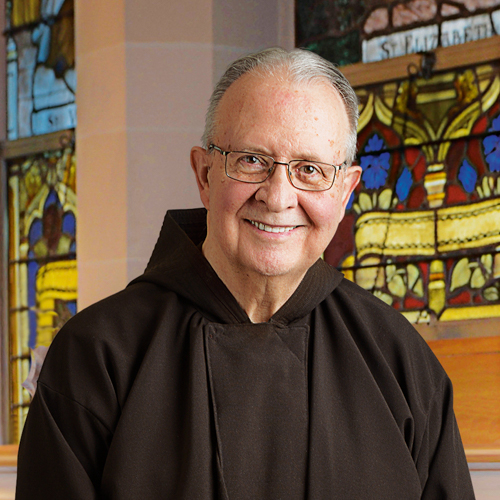 “I thank all the Retirement Fund for Religious donors for all they are making possible,” says Father William Graham, 75, a member of the Capuchin Friars, Province of St. Augustine, Pittsburgh. “Our role is to support you. You are giving to us, and we are giving back to you. Family does those things.”

Born in Saxonburg, Pennsylvania, as the oldest of two boys, Father William “Bill” Graham grew up in the Catholic faith attending Catholic schools.

Unlike many other religious, Father Bill didn’t immediately desire to become a priest. In fact, for most of his formative years, he wanted to be a scientist. It was only years later that his interest changed.

Father Bill notes, “The transition from science to religion was easy. I saw the beauty and mystery of God’s work in science and the natural world around me.”

His aunt arranged for him to meet a Capuchin Friar and he notes, “I spent the next three months pretending to pray about it, but I already knew. If I had to give up my family, I knew I wanted something as close to family as I could get, and that was the friars.”

Father Bill was ordained on August 26, 1972. His first assignment was Director of Admissions for St. Fidelis college. But he was drawn to ministering to families and later obtained a Master’s in Psychology. He put this education to work at a parish in Conway, Pennsylvania, allowing him to live out this call of working with families.

After spending some time in provincial leadership, Father Bill returned to school and became a canon lawyer. Now in his retirement, Father Bill is focusing on returning to full health again after some complications. He is grateful for the medical support he’s received from the community.

With all he does, he remembers a prayer given to him some years back. He quotes it by saying, “Oh good Jesus, make me a priest in the likeness of your own heart.” He adds, “Throughout my years, the Lord has been very good to me, and I have faithfully lived out this prayer in gratitude.”