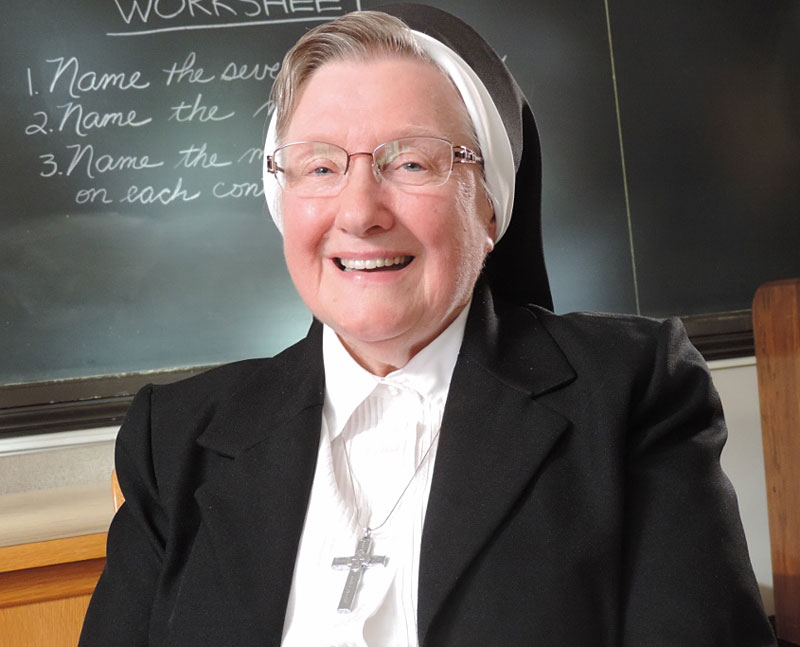 Approaching her 79th birthday on December 30, Sister Gemma Pepera describes herself as “active pre-retired.” A member of the Sisters of the Holy Family of Nazareth in Des Plaines, Illinois, Sister Gemma has served in religious life for over 60 years. Currently she ministers full time at Nazarethville, her community’s retirement and nursing center.

“My mother told me that I talked about becoming a sister before I was in the first grade,” recalls Sister Gemma. “I made up my mind when I was in the sixth grade.”

Sister Gemma entered religious life in August of 1952, and her years of ministry have included everything from teaching to community administration to foreign missions. Her first assignment was teaching second grade. At the time, an average class size was over 40 students, and there was no teaching assistant. Her largest class was a staggering 68 students, but Sister Gemma was unfazed. “It was a wonderful year! The students were so eager to learn,” she said.

Sister Gemma served for 24 years in various levels of congregational leadership, including nine years at the community’s international headquarters in Rome. During this period, she had several opportunities to meet Saint John Paul II, who was familiar with the Sisters of the Holy Family of Nazareth because they served in his hometown in Poland. In addition to being present at several general audiences with him, Sister Gemma also attended Mass in his private chapel and audiences in the papal library and at Castel Gondolfo.

The Philippines, where she ministered for 14 years, holds a special place in Sister Gemma’s heart. During her time there, she worked with other members of her community to help feed underprivileged children. What started out as a once-a-week meal has expanded; when the sisters receive grants, the children can get a healthy meal three or four times a week. Sister Gemma also remembers the work the novices did to help the needy receive the sacraments.  “One thing I remember with joy is the hug I got in the area chapel from a woman who had recently married in a mass wedding (20 couples!) at the cathedral,” said Sister Gemma.  “She was so happy to be married in the Church and able, after many years, to receive the Eucharist again.”

Throughout her years of ministry, Sister Gemma was extensively involved in her community’s formation program. “A lot of what I taught was the charism and spirituality of my own congregation,” she explained. “So, it always touched my heart, and I hoped it would touch theirs as well.”

Meet Sister Gemma and other senior religious in our video: