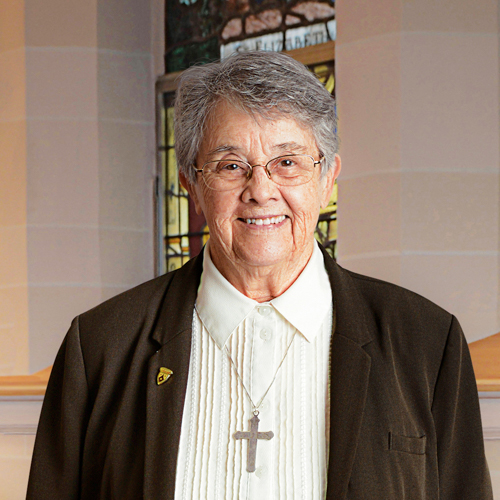 “We couldn’t be living here if we didn’t get the help from people like them,” says Sister Angele Marie Sadlier, 91, a member of the Congregation of Our Lady of Mount Carmel in New Orleans. She often contemplates the generosity of people who donate to the Retirement Fund for Religious and the effect their help has had on her life.

“It was the impact of the sisters throughout my early education that led me to know the Lord.”

Sister Angele attended a Catholic boarding school as a youth, where she got to know the sisters well and set her mind to becoming one of them. At that point, her family tried to deter her from entering religious life, but she was not to be deterred. She had a strong feeling that she knew what her calling was going to be.

“The sisters were my inspiration. They were delightful and marvelous teachers, so warm and enjoyable to know,” notes Sister Angele.

Sister Angele entered religious life on September 3, 1947. After completing her community’s two-year school temporary certificate-to-teach program, she began her ministry. She taught all grade levels at various schools. After earning a master’s in English at the University of Notre Dame, she studied at the University of Southern Indiana and at Boston College, where she became certified as a school administrator and supervisor. She then became a school principal and served a variety of schools in southwest Louisiana.

Some years later, Sister Angele went into community leadership. This new path even took her to Washington, DC for some time. At age 71, Sister Angele decided to return to Louisiana, the place she thought of as home, where she focused on leading retreats and providing spiritual direction. She continues these activities to this day, even in “retirement.” Luckily, she can focus on the service she can give without worry and minister among God’s people with joy.

She credits the Retirement Fund for Religious donors for allowing her to continue ministry work among the people using God’s gifts.  She notes, “I thank the Lord for all those people who give. They are just so generous, and I don’t think we would make it without them.”

What’s Sister Angele’s recipe for a long, happy life? “Learn to be still in a noisy world,” she says.