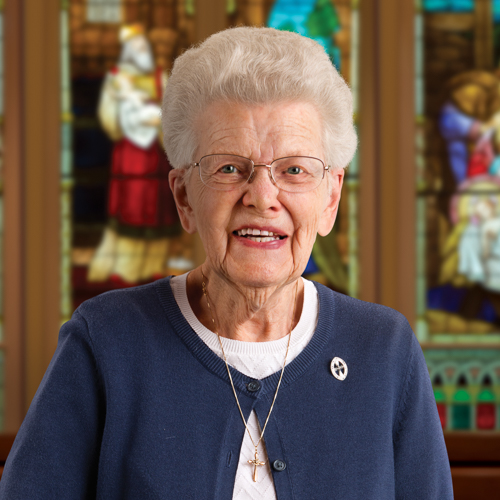 Born in 1927, Sister Anne Cecile came of age during the Second World War. “My dad was in the Navy,” she explains. “He was away from the time I was in seventh grade through high school, but he was supportive of my entering the Ursulines. He made it home in time to see me receive my habit.

“I entered with six other girls. We got to know each other and would often say, ‘Thank God we can laugh,’ because otherwise it would have been hard. We could only see our parents once a month. There were no phone calls. But it was surprising how we fell into the schedule. I think this is what happens when you really want to be an Ursuline.”

Sister Anne Cecile began teaching in 1947 and ministered in elementary education for the next 50 years, serving in a total of nine schools and teaching every grade except third and fifth. Along the way, she obtained a bachelor’s and a master’s degree, both in education. “During the early years, we had to take classes on Saturdays and in the summer because they couldn’t take us out of teaching,” she says. “So, it took a while.” Although Sister Anne Cecile also served as a principal for 16 years, her heart was in the classroom. “There’s just something about teaching,” she says. “I enjoyed planting the seeds of my students’ education and telling them about the God who made them and loves them.”

In 1997, Sister Anne Cecile retired from teaching, but she was not ready to stop ministry. “I hit 70 and thought, ‘There’s still warm blood,’” she says. “I’m not giving up.” She learned of an open position at a nearby daycare center. “For the first time in my life, I had to apply for a job,” she recalls. She was hired to work with infants from two months to one year of age and was required to obtain a certificate in early childhood education. “At age 70, I was going to night school,” she says, laughing.

Sister Anne Cecile thought she would work at the daycare center for one year, but she ended up staying 16. In 2014, she officially retired. “I knew I was getting older,” she says. “Around 87, I had to admit that it was time to throw in the towel.” Today, she continues to volunteer in her community’s development office.

“My years as an Ursuline have been wonderful,” says Sister Anne Cecile, who celebrates her 75th jubilee during 2020. “Every day is a blessing. Pray a lot, laugh a lot, and know that God will give you the grace to get through each day.”