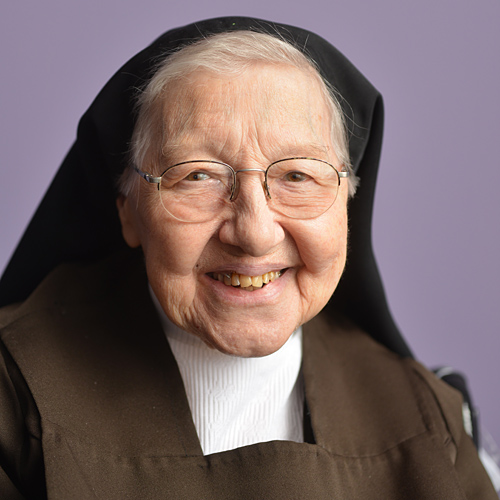 “My birthday is 2-4, 2-4,” explains Sister Anne Mika, a member of the Discalced Carmelites of Danville, Pennsylvania, who was born February 4, 1924. For more than 60 years, she has lived—joyfully lived—the contemplative life of a cloistered religious sister.

A native of Chicago, Sister Anne attended Catholic school taught by Felician sisters. When it came time for high school, she took what was then known as a “commercial course,” a curriculum that focused on secretarial and bookkeeping skills. Yet she told her teacher, “I never want to do any kind of bookkeeping—never!” She completed her studies, graduated, and left school to help support her mother and siblings because her father had died. For 12 years, she worked at the Fulton Meat Company.

During these years, she knew she had a vocation to religious life but was uncertain which community to enter. “We used to go joy riding on Drexel Boulevard,” she says. “And there was a big sign for the Carmelites, so I wrote and asked, ‘Are you the same ones that the Little Flower (St. Thérèse of Lisieux) belonged to?’” The community replied that Sister Anne was looking for the Discalced Carmelites. Eventually, she found her way to Mt. Carmel, Pennsylvania, where a new foundation of the order was being formed. She entered in January 1953.

In 1961, her community built a monastery in Elysburg, Pennsylvania. During her years of religious life, Sister Anne’s various forms of work have included baking altar breads, serving in the community’s infirmary—and bookkeeping, which she continues to assist with today. In 2008, her small community sold their monastery and entered into an agreement to reside in the retirement center of the Sisters of Saints Cyril and Methodius in nearby Danville. To the extent possible, the Carmelites maintain their traditional practices of work, silence, reflection, and prayer. Although it is a change from the monastic life she has known, Sister Anne greatly enjoys her new friends. “These sisters are just grand,” she says. “It couldn’t be better here. The next step is heaven.”