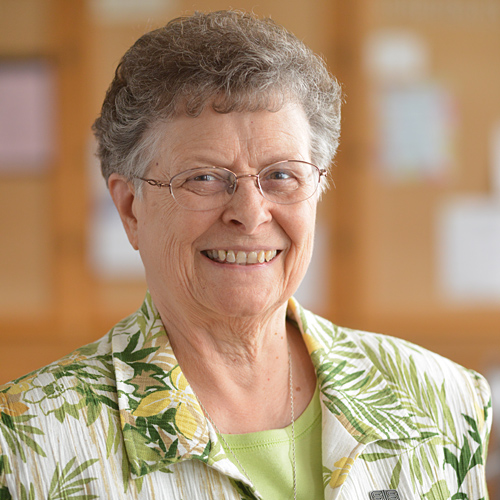 The stage brought Sister Donna Marie Ivanko, 81, to religious life, and now she uses the stage to minister in that life. A member of the Sisters of Saints Cyril and Methodius in Danville, Pennsylvania, Sister Donna started dancing practically as soon as she started walking. At five years of age, she appeared in a local minstrel show attended by members of the Sisters of Saint Cyril and Methodius. After the performance, she told her mother, “I want to go to sister school.”

Sister Donna graduated from Saint Cyril Academy, her community’s high school, which she attended as a boarding student from the age of 13. In 1953, after six months of college, she entered religious life. “It was the joy that I saw in the sisters,” she remembers. “It was God in them that made them so happy. I wanted to be part of that life.”

She began her ministry teaching first grade, attending summer school to pursue her undergraduate degree and taking courses in secondary art. She moved on to the high school level, where she taught a variety of subjects but focused primarily on fine arts. From 1980 to 1996 and again from 1998 to 1999, she was principal of the academy where she had been a student, serving until the community made the difficult decision to close the school. In 2003, she was asked to direct her community’s preschool and kindergarten. “I wasn’t sure I could do it,” she confesses. “But I thought, ‘I’ll meet the children at the door and see what happens.’ I’ve done that every day since.”

She currently serves on her community’s leadership council, a position she has held for the last 12 years. In 2002, she created Summer Stage, a two-week drama camp that began for 5 and 6 year olds and blossomed into a second program for ages 7 to 12. (A student from this program is now performing on Broadway!) Sister Donna not only directs the program—which includes two mini-productions for the younger children and a full musical for the older ones—but also makes the costumes.

At 81, Sister Donna is full of energy and smiles. “Make up your mind to be happy,” she says. “I think that’s something you have to do every day.”