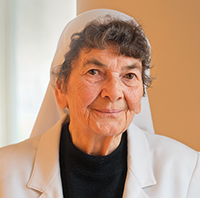 “My vocation came from God and a special love of Mary, influenced by my mother,” says Sister Joan Ann Springman, a member of the Ursulines of the Central Province. “My mother valued the religious life so much that she promised her simple gold wedding ring to the daughter whom God might call to this life.”

Sister Joan Ann knew that she wanted to be a religious sister in second grade. After graduating high school, however, she was uncertain which community to enter. “Contemplation is my chief love, but I asked God to use me as he wanted,” says Sister Joan Ann. “At age 19, God drew me to the Ursulines, a religious congregation that is contemplative and then goes out in ministry.”

Her ministry included service in numerous parishes and schools in Illinois, Louisiana, Minnesota, and Missouri. Sister Joan Ann, who began studying piano at age 6, holds a bachelor’s degree in voice and a master’s degree in liturgical music with a concentration in pipe organ. In parishes, she not only played the organ but also trained organists and directed choirs and congregational singing. On the educational side, she taught music classes, gave private piano and voice lessons, and directed a high school chorus.

Despite her musical gifts and many years of service, however, Sister Joan Ann’s life has had one primary focus. “For me, religious life is about my personal relationship with Christ,” she says.