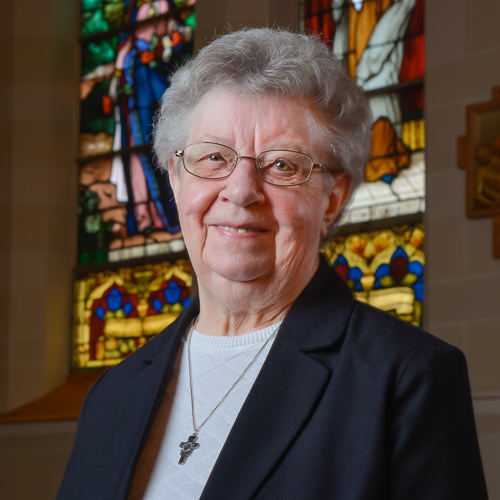 At age 86, Sister Kateri Peake has yet to slow down. In fact, she has yet to retire! A member of the Bernardine Franciscan Sisters of Reading, Pennsylvania, she currently serves as administrator of her community’s motherhouse, a position she has held for the last 12 years.

Growing up, Sister Kateri was taught by members of what is now her religious community. She has fond memories of helping the sisters with various chores after school. The opportunity to get to know the sisters outside of the classroom planted the seeds for her own vocation. “The chance to visit with the sisters was something special. It exposed you to a part of their way of life,” she says. She attended the community’s high school as an aspirant, which was a special program for young women considering a religious vocation.

Sister Kateri entered her community in August 1951, shortly after high school graduation. Following a year in the novitiate, she began teaching. During those early years, she also pursued her bachelor’s degree in secondary education. Later she obtained two master’s degrees, one in social studies and one in educational administration/supervision.

She ministered in Catholic schools for roughly 40 years. Most of those years were spent at the college and high school levels, both as a teacher and administrator. For more than 20 years, she served as principal of her community’s all-girl high school in Washington, DC, where she also taught as needed. “My favorite subject to teach was American history,” she says. “How could you not love something like that when you were surrounded by museums and memorials and living history?”

A highlight of her educational career came in 1973, when her school was acknowledged by the National Catholic Educational Association (NCEA) as an “exemplary school,” which is the equivalent of today’s National Blue Ribbon Schools Program. “One thrill was to go to the White House to receive the award,” explains Sister Kateri. “It was a great achievement, especially knowing that it was the result of the concerted efforts of administration, faculty, staff, and students.”

Since 1995, Sister Kateri has served in administration for her community, including a term as Province Minister. Throughout her many and varied ministries she considers herself blessed. “Each one called me to something different, and I couldn’t do it without prayer,” she says. “My favorite prayer is the Magnificat because it is a prayer of joy and promise.”