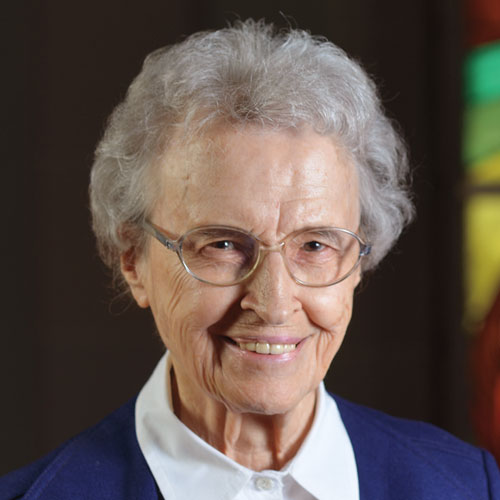 “I was attracted to religious life from an early age,” explains Sister Luanna Brucks, a member of the Sisters of the Most Precious Blood of O’Fallon, Missouri. “But when I was in eighth grade, my teacher told us, ‘Even if you forget everything else, don’t forget what I taught you about the Eucharist.’ That sentence said everything to me. Knowing I would always have the Eucharist sealed my decision to enter religious life.”

Sister Luanna entered her community in August of 1942. She began teaching in 1945 and spent nearly 30 years in educational ministry, primarily teaching music. Sister Luanna, who holds a bachelor’s and a master’s degree in music education, did not begin formal music training until she attended high school with the Precious Blood Sisters. “Those were Depression years,” she explains. “And lessons were 50 cents.”

Among Sister Luanna’s fondest memories are the many musicals she directed. “There’s nothing that develops a sense of community more than preparing for opening night,” she remarks. One opening night especially stands out in her mind: the one cancelled because President John F. Kennedy had been shot that day.

At 90, Sister Luanna remarks that she doesn’t really have any tips for a long life. But she does have some advice for a happy life. “Get up each morning knowing that God loves you and take it from there,” she says.