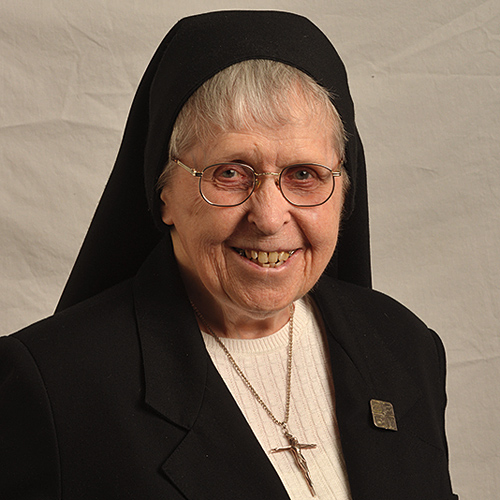 “I thought of being a sister in 10th grade,” says Sister Susan Polchin, a member of the Sisters of Saints Cyril and Methodius in Danville, Pennsylvania. Her father had been killed when she was just shy of 12 years old, and after graduation she went to work to help support her family. Rather than enter religious life immediately after high school, as was often the custom at the time, Sister Susan worked for five years following graduation. “I was a breadwinner and didn’t know if my mother would give me permission (to enter),” she explains.

During those years, the call to religious life persisted. “I would go to different activities—parties and social events,” says Sister Susan. “I had a good time while I was there, but there was always an emptiness when I came home.” Ultimately, her mother supported her vocation, and Sister Susan entered religious life in 1946. “My mother was there for my first profession in 1949,” Sister Susan says, “but she had passed away by the time I made final vows in 1954.”

Sister Susan ministered for more than 25 years in education, primarily teaching second grade and high school physical education. She also coached the girls’ basketball team. “The girls on the varsity team would come to the gym after study hall to practice,” she recalls. “And if we were one (player) short, I’d pin up my habit, put on sneakers, and play with them.” Later, she ministered for 17 years as a pastoral associate, while she continued part-time teaching. She found visiting the sick particularly rewarding. “I got more from them than they got from me,” she says.

Today, at 93 years of age, she resides in her community’s retirement center, Maria Hall. She stays active in community life by working at the reception desk and by serving as a lector at Mass and as a prayer leader during the recitation of the Divine Office. “Be grateful to the Lord for each day,” she counsels. “And have a sense of humor.”