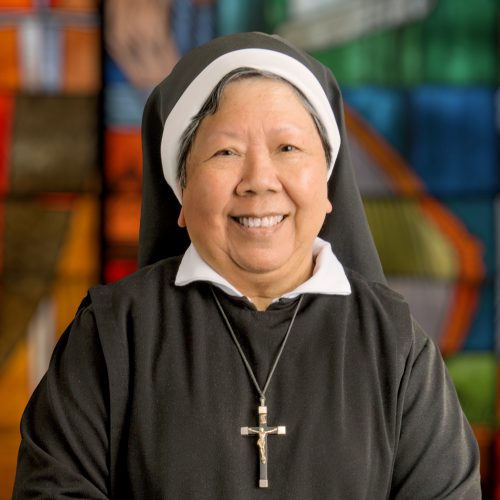 “I never thought I would be a sister,” says Sister Guadalupe Jumarang, a member of the Franciscan Sisters of Our Lady of Sorrows in Beaverton, Oregon. “I had boyfriends; I was even engaged to be married at one point. These were good men, but I didn’t choose that life. Jesus had plans for me.”

Born in 1946, Sister Guadalupe grew up primarily in the Philippine Province of Laguna. There, she attended Catholic schools and received her BS in education from Laguna College. Upon graduation, she taught at a nearby school for 12 years before transitioning to teaching positions that took her first to Manila, then to Nigeria, and later, Greece.

In 1990, she moved to Canada, where she continued to teach and was active in her local parish. By chance, she was at a Mass attended by several members of what is now her religious community. Two of the sisters were also from the Philippines, and Sister Guadalupe felt an immediate connection to the group. Following this initial meeting, Sister Guadalupe began to receive nightly phone calls from one of the sisters. “She would say, ‘You should come join us,’ and she encouraged me to pray,” recalls Sister Guadalupe. “The priest at my parish and my friends also recognized that I had a vocation.”

In 2000, Sister Guadalupe entered her community at the provincial house in Beaverton. After three years of formation, she professed first vows. She returned to Canada, where her community has a house. For the next 15 years, she served as a pastoral associate and as the spiritual director for the local Legion of Mary group. (The Legion of Mary is the largest lay apostolic organization in the Catholic Church.)

In 2015, she returned to the United States to serve as the local superior of Our Lady of Peace, one of two retreat centers run by her community. In late 2019, Sister Guadalupe suffered a serious fall that broke several vertebrae and injured her spinal cord. She spent six months in the hospital. Despite the severity of her injury, she is now able to walk, which her neurosurgeon says is a miracle.

As Sister Guadalupe continues to recover, she remains active with the Legion of Mary, and she trusts in the will of God. “One thing in my life is that I really pray hard,” she says. “I got this from my mom, who was very devout. From a young age, I would pray with her. In my prayer and meditation, I keep asking Jesus, ‘What else would you like me to do?’”