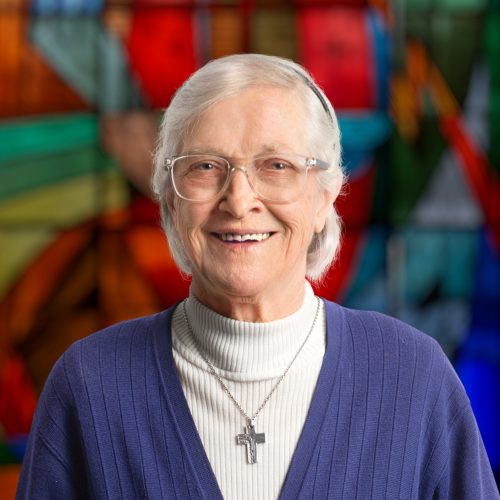 “In France, during the summers especially, the sun goes down very slowly. I would go outside by myself and admire the formation of the clouds. Without words, I would have the feeling of being wrapped in God’s great love. Little by little I realized that God was asking me to help others discover his great love too.”

Born in 1934, Sister Mary Hope grew up in a small town that was a few miles away from Pontmain, France, the site of a Marian apparition in 1871. She remembers when World War II began. “I witnessed an aurora borealis with my parents and, soon after, the official beginning of World War II in 1939. German occupation followed. These difficult years ended in 1945, thanks to the American Army that sacrificed so much that we may have life.”

The Catholic school Sister Mary Hope attended during her childhood was a country school with one teacher and one room for all grades. “Our teacher was an outstanding teacher,” she says. “At that time, all students took a state exam at the age of 14. Those who passed the test were qualified to start working. I passed! Since my parents could not afford to send me away from home to study, my teacher hired me to be her assistant. I worked with her for two years.”

In 1950, at age 16, Sister Mary Hope entered her religious community. “I wanted to be a missionary in Africa,” she recalls. “But God has his plan.” In addition to France, her new community had houses in England and San Antonio, Texas. After making her first profession in 1953, Sister Mary Hope was sent to Great Britain to study English for 18 months. “Then I was ready to go to Texas,” she says.

In 1955, she arrived in San Antonio. From 1955-1969, she ministered at a Catholic boarding school founded by her community. She taught in the elementary grades and helped care for the boarders, all while pursuing her bachelor’s degree. In 1969, she was transferred to her community’s provincial headquarters and began serving in formation. During these years, she obtained a master’s degree in theology.

“After about seven years in San Antonio, I finally gave up my hope to go to Africa,” says Sister Mary Hope. “Then, in 1991, I had a shock. I received a letter from our Mother General asking me to serve in Papua New Guinea. Although it was a struggle, I said ‘yes’ to the call.” From 1991-1994 and again from 1998-2000, Sister Mary Hope ministered in Papua New Guinea. “Looking back, I feel this experience has been one of God’s greatest gifts in my life,” she says.

At 87, Sister Mary Hope continues to serve by helping care for the other three senior sisters in her local convent. “All along, I have known that all I have is the present moment,” she explains. “Trust in God and rejoice in whatever he gives because he lovingly knows best.”