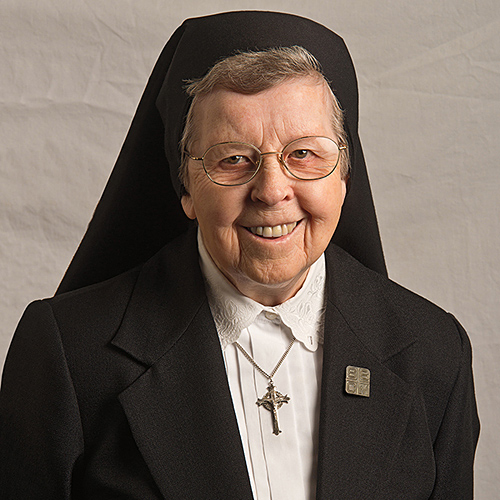 “What I know about religion comes primarily from my parents and the parish priest,” says Sister Rita Polchin, 87, a member of the Sisters of Saints Cyril and Methodius in Danville, Pennsylvania. The youngest of 10 children growing up in a small mining town, she attended public school because her parish did not have a school. “In those days,” Sister Rita explains, “the parish priest was able to teach religion in the public school.”

As a teenager, Sister Rita often attended retreats given by a group of Passionist Sisters. One day, however, she decided to join a few friends who went to visit the Sisters of Saints Cyril and Methodius. She recalls, “I spoke with the General Superior at the time, who said to me, ‘Rita, you belong here.’ She knew that my parents had been married by our founder, Father Matthew Jankola. My parents were married in 1905, and Father founded the congregation in 1909.”

After high school, Sister Rita worked in a factory for two years. “Even then,” she says, “I was evangelizing my co-workers. I’d tell them about Jesus and ask them to watch their language.” Ultimately, however, she followed the General Superior’s suggestion and, in 1949, entered the Sisters of Saints Cyril and Methodius. After her novitiate, she began her teaching ministry in 1954. During the summers, she worked toward degrees in education, achieving a master’s degree in educational administration from Fairfield University in Connecticut. Sister Rita taught in parish schools in Connecticut, Illinois, New York, Pennsylvania, and South Carolina. She also served as principal in both Pennsylvania and South Carolina. She describes some of her classrooms as “wall to wall with students.” She particularly remembers one year: “I had 54 students,” says Sister Rita. “We had no problems, however, because the youngsters were well-behaved and eager to learn.”

A highlight of her more than 30 years in the teaching ministry was being principal at schools attended by the children of her former students. “This experience was indeed a privilege,” says Sister Rita.

Even at 87, Sister Rita stays busy with a host of activities, including serving as receptionist at the motherhouse, driving sisters to and from their doctors’ appointments, and caring for the Adoration Chapel. With a ready smile, she divulges her secret to a long, happy life: “Be faithful to your prayer life and maintain a good sense of humor.”