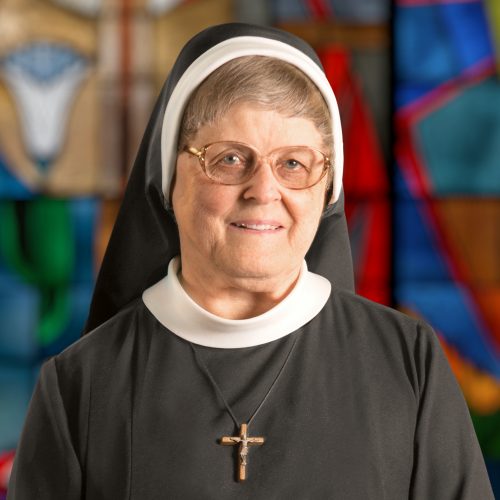 Born in 1933 in Oklahoma, Sister Theresa’s family moved several times as she was growing up, finally landing in Beaverton, Oregon. There she attended a high school run by what is now her religious community. “I was a boarder at the high school,” she says. “I had no wish to be a sister. I dressed up in high heels, jewelry, and long dresses—and I liked boys.

“In January 1950, during a retreat for the students, I was leaving the chapel and suddenly experienced an overwhelming desire to be a sister. The entrance date was in February.  I told the Mother Superior that, if I didn’t enter right away, I might lose the desire because it hit me so hard and so fast. She let me enter on January 15.”

Sister Theresa finished high school as a postulant in her community. “Jesus chose me to be a religious,” she says. “So I knew He would take care of me.”

In 1953, after completing her novitiate, Sister Theresa began teaching. At the same time, she pursued her teaching degree and later a library certification. For 27 years, she ministered in education, serving at multiple schools and in various roles, including secretary, librarian, and principal.

During her years of retirement, Sister Theresa has taken on numerous volunteer ministries, such as overseeing the convent library and working in the garden. “I help out wherever is needed,” she explains. At 88, she enjoys embroidering and making rosaries. “That keeps me out of mischief,” she says, laughing. “When I started making rosaries several years ago, my mother said, ‘Don’t make them so fancy that people can’t afford them.’ So, the ones I make aren’t silver or crystal. They’re just nice rosaries to pray on.”