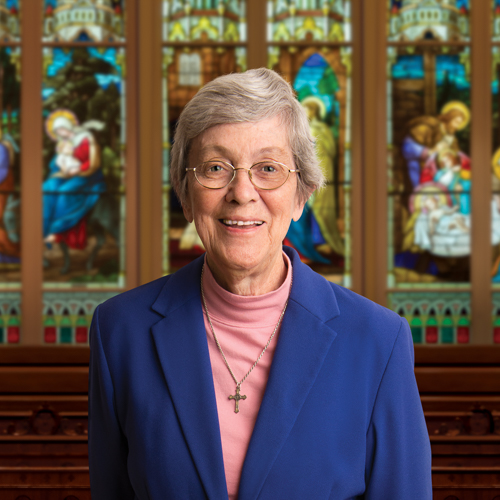 “Live every day fully and gratefully,” says Sister Theresa McGrath, 86, a member of the Sisters of Charity of the Incarnate Word, San Antonio, Texas. “I’m grateful that God called me to religious life. I’m also conscious that the gifts and talents I have are really given to share with other people.” For 70 years, she has been sharing these gifts through ministry.

One of 10 siblings, Sister Theresa was just 16 years old when she left her close-knit family in Ireland and traveled to San Antonio to enter her religious community. “Lots of Irish people went to the foreign missions,” she explains. “It was difficult being away from family, but I just felt that this was where God was calling me.”

After professing first vows in 1953, Sister Theresa worked in the registrar’s office at Incarnate Word College (now University of the Incarnate Word) while pursuing a bachelor’s degree in mathematics. She later received two master’s degrees, one in mathematics and one in religious studies. She also studied at the Catholic University of America in Washington, D.C., and at the East Asian Pastoral Institute in Manila, Philippines.

Over the years, she ministered in a variety of areas, including serving as a teacher and administrator in higher education for 25 years and serving in congregational leadership for 10 years. From 1989-2008—following a six-month sabbatical as a missionary in Zimbabwe—she was the Vice President for Mission, Ethics, and Spirituality at Incarnate Word Health System, which later became part of CHRISTUS Health. (A network of more than 600 health-care centers, CHRISTUS Health is sponsored by Sister Theresa’s congregation and two other religious communities.) “As a Catholic health system, we sought to have a strong Catholic identity, especially with regard to social justice, human dignity, and preferential care for the poor.

“I was given great opportunities,” she says. “I loved everything I was ever doing. I didn’t come (to religious life) to be a teacher or a nurse. I came to be a sister. I put my whole heart and soul into whatever I was asked to do.”

At age 86, Sister Theresa is technically “retired.” However, she continues to volunteer in her community’s development office for 4 or 5 hours daily, often assisting with editing and proofreading. “If I was just hanging around, I’d be bored stiff,” she says. “I’m very blessed with good health. That will come to an end one day, and that’s okay. One of my favorite quotes from Scripture is from Isaiah: ‘I have called you by name: you are mine’ (Is 43:1). That’s what gives me strength and joy. We don’t know what the future holds, but we do know the future is in God’s hands.”