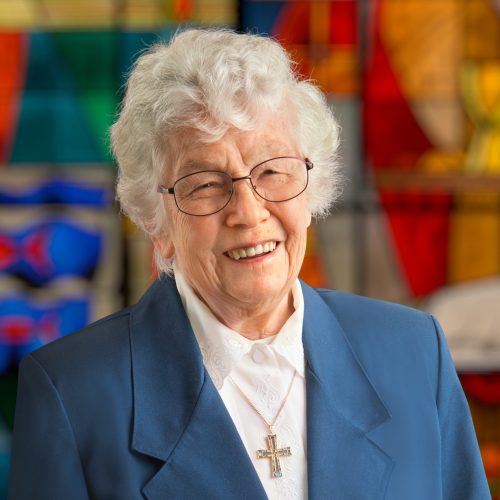 “I have been devoted to [Saint] Martin de Porres since I was a child,” says Sister Ursula Marie George, who has been a member of the Ursuline Sisters of Cleveland for 75 years. “His simple lifestyle inspired me.”

Born in 1926, Sister Ursula Marie was also inspired and nurtured by her parents’ deep faith. “My mother was very holy,” she says. “And I remember that every day before work, my father would kneel down in the living room to say his morning prayers.”

“During the war [World War II], I had two brothers who were serving. Every night our family said a rosary for their safety and for all service men.”

During the primary grades, Sister Ursula Marie was educated by members of what became her religious community. Her fourth-grade teacher, Sister Dominica, made a lasting impression. “All the children loved her,” says Sister Ursula Marie. “She was just such a fun teacher. In the spring, I would bring her pussy willows from our garden, and she would be so delighted.”

After graduating from high school, Sister Ursula Marie worked at Richmond Brothers, a clothing manufacturer in Cleveland. By then, Sister Dominica was teaching in a school close to the factory. “One day, I surprised her with a big bunch of pussy willows,” she says. “During the visit, I told her that I was thinking of becoming a missionary. She encouraged me to speak with Mother Marie Sands, the Ursulines’ superior. Mother Marie explained how I could serve needy children right here, through teaching.”

Sister Ursula Marie entered her community in September of 1946. She began teaching shortly thereafter, while at the same time pursuing her bachelor’s degree at nearby St. John College. “They needed teachers,” she says. “So, we would go to school on Saturdays and in the summer.”

She taught for a total of 44 years in 10 different schools in the Diocese of Cleveland. She particularly enjoyed preparing students for First Holy Communion. “It was a very special time for them,” she recalls. “It was the first time they were going to receive Jesus.”

After retiring from teaching, she spent another 23 years in various forms of ministry, including providing clerical support to a sister who served as an educational consultant. For 20 years, the two were engaged in creating SciTT (Science for Today and Tomorrow) Kits, which provided elementary schools with lesson plans and related activities for science.

While officially “retired,” Sister Ursula Marie continues to serve in various volunteer ministries. She also continues her devotion to St. Martin de Porres. “When I entered the Ursulines, one of the sisters gave me an old statue,” she explains. “My mother painted it to look like St. Martin de Porres. I’ve broken that statue a few times over the years, but I always put it back together. I call on him every evening in my prayers.”