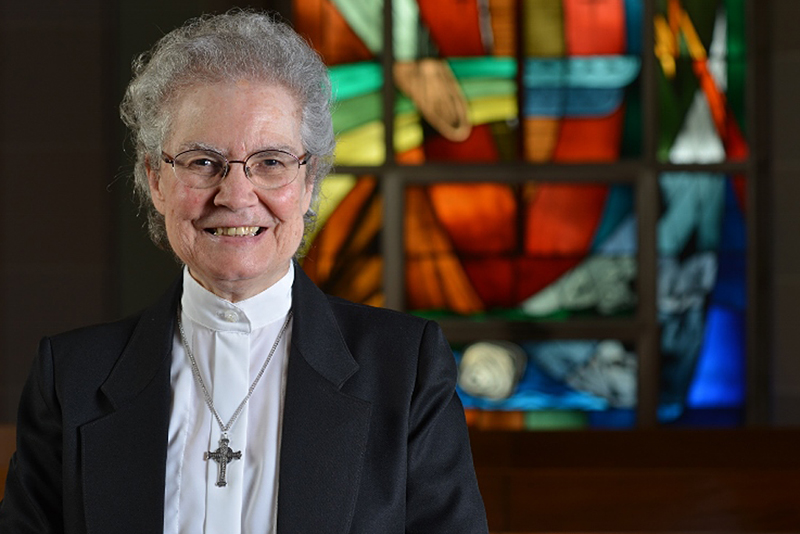 “I’ve been stitching over 50 years,” says Sister Viola Marie Spire, a member of the Sisters of the Most Precious Blood of O’Fallon, Missouri. For most of her religious life, she has served in her community’s Ecclesiastical Art Department, making liturgical vestments, paraments, and stoles. Working alongside other sisters, she carries on a tradition of art and ministry that her community has engaged in since 1858.

Early in her novitiate training, the novice mistress gave a tour of the motherhouse, which included a visit to the Ecclesiastical Art Department. Sister Viola Marie was hooked! She asked if she could serve there and began right away, fitting in work in the department whenever she had a break from her studies. Since making her first profession in 1954, she has worked in the department for almost all of her 60-plus years of religious life.

Sister Viola Marie did minister briefly in education, serving as a teacher for four years. “My first year, I taught kindergarten. I had 60 little ones in the morning and 60 in the afternoon—and no training! But for the first two months another teacher helped me and gave me encouragement,” she recalls. “I did love the little ones,” she says, “but I was trained in the department. So when given the option, I opted to return back home [to the motherhouse].”

As part of the Ecclesiastical Art Department, Sister Viola Marie helps produce altar paraments, vestments, stoles, and funeral palls. She is the only one in the community who can operate what she refers to as the “zig zag” machine, a piece of equipment similar to a monogramming machine. “If I break my arm, we’ll have to close shop,” she says, laughing. The “zig zag” machine puts satin stitches on the fabric, and Sister Viola uses it to create various designs. The designs are then outlined by machine using two strands of gold thread, a process known as “couching.”

When Sister Viola Marie came in 1951, the department had as many as 22 sisters working full time. Today, there are 8 sisters who minister there part time. Although they’ve scaled back on production, the sisters still create one-of-a-kind pieces. In 1999, the department was commissioned to make a stole and mitre for Saint John Paul II during his visit to the Archdiocese of St. Louis. “We made sure that every sister put at least one stitch in the stole,” said Sister Viola Marie. “It was a great joy.”

At 82, Sister Viola still works in the department part time four days a week. During her free time, she likes visiting with the residents of her community’s nursing and rehabilitation center, reading, and enjoying nature. “I try to be a joyful person,” she says. “I thank God for all his blessings, and I try to be his instrument.”