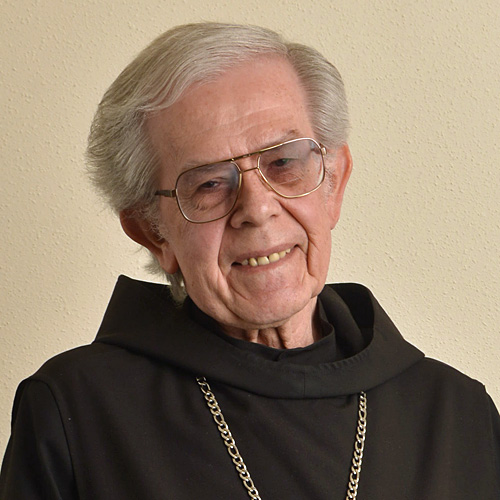 From his hilltop home at Mount Angel Abbey in St. Benedict, Oregon, Abbot Gregory Duerr, 81, can look down on the town where he lived from age 6. “I like to refer to this (abbey) as a ‘holy mountain,’” he says, “which, biblically, is a place where God speaks.” Raised in a strong Catholic family, Abbot Gregory was attracted to the Benedictines at a young age, beginning Mount Angel Seminary High School after eighth grade and officially entering the monastery after two years in the seminary college. He made his first profession in 1958 and marks his 60th jubilee in 2018. “In my heart, I felt called to this life,” he says. “Since then, it’s been a straight shot. I’ve never doubted.”

After making his solemn profession in September 1961, Abbot Gregory was ordained a priest in May 1964. The impact of those events on his life is still palpable. He particularly remembers his profession Mass. “During the solemn profession, a monk takes part in a ceremony called ‘mystical burial,’ where he is covered with a black pall while lying on the sanctuary floor,” he explains. “At Communion, they who have died with Christ are called to rise. That ceremony represents a monk’s dying to the world. Profession and ordination are events that open the door to a life of service and ministry.”

Following ordination, Abbot Gregory pursued a master’s degree in classical languages from the University of Washington. He also holds a master’s degree in formative spirituality from Duquesne University. His community owns Mount Angel Seminary, the oldest seminary on the West Coast. Most of his ministry has focused on formation, from being novice master to serving as formation director at the high school, college and theology levels. At the same time, he has acted as a spiritual director, sometimes working with as many as 30 individuals at a time.

After serving as prior for two years, he was elected abbot in 2009. He retired from this role in 2016 due to issues of age and eyesight. Retirement came at the same time as a diagnosis of cancer, which has been in remission since treatment. Over time, Abbot Gregory has been able to regain his strength and return to teaching and formation. Today, he is pleased to again be active in spiritual direction, something he had to curtail during his tenure as abbot.

Abbot Gregory understands that the people he directs are searching, just as he is. “We become a monk to seek God as the primary focus of our lives,” he says. “In the evening after dinner, I come to my room and pray four psalms: 27, 42, 63, and 84. They are all psalms of desire. God is our ultimate desire.”