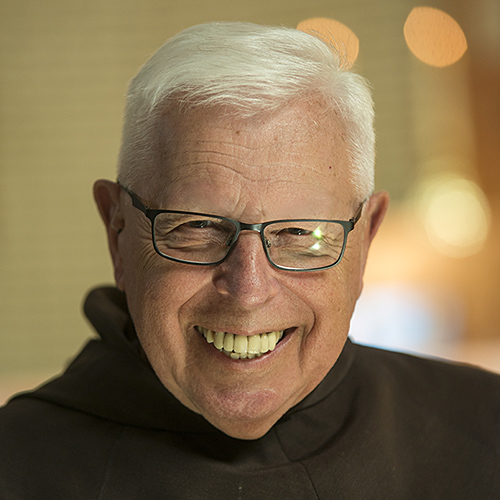 “Have sacraments, will travel,” says Father Albert Bunsic, a member of the Discalced Carmelite Friars of the California-Arizona Province. During 59 years of religious life, he has done just that, serving wherever and however he was needed.

Now in residence at St. Therese Church in Alhambra, California, Father Albert grew up in Binghamton, New York, with his twin brother, Fred, and an older brother, John Paul. As a youngster, his grandmother Elizabeth was a great religious influence in his life. “When I was very young, she instilled in me a sense of gratitude,” says Father Albert. “She taught me how to pray, and my prayer was to say thank you to God every day for everything.”

After attending two years of junior college, Father Albert received a scholarship to play football for the University of San Diego, which was then the location of the diocesan seminary. There he met two young seminarians who led him to discover the Carmelites. Ultimately, Father Albert was the only one to pursue a vocation to the priesthood, but the three remained lifelong friends. “God used them to help me in my discernment,” says Father Albert. He entered the Carmelite novitiate in September 1958, professed first vows the following year, and took solemn vows on September 8, 1962.

In 1965, Father Albert undertook further formation at the Carmelite House of Study in Washington, DC. He was ordained a priest on June 3, 1967, at the Basilica of the National Shrine of the Immaculate Conception. “It was such a thrilling day for me,” he says. “My parents were there, and they were really happy. It was a time to thank them for all they did. I still get goosebumps when I think about it.”

His years of ministry had him zig-zagging between California and Arizona. He served not only in various parishes but also in formation and retreat ministry. For six years, he was superior of his community’s house of prayer in Oakville, California, followed by three years as the superior of the novitiate in San Jose, California. Since 2013, he has been at St. Therese Church, a parish founded by his religious order in 1924. Although technically “retired,” Father Albert continues to serve. “I can’t do everything,” he says “but I am able to contribute by hearing confessions, anointing the sick, and celebrating Mass. I’m happy to do those things.