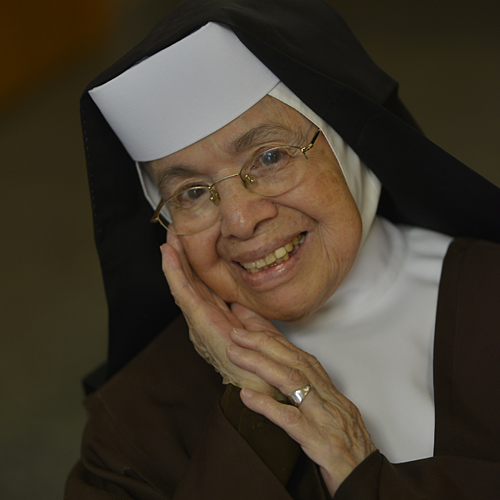 “I was born in a city that has everything from A to Z in the USA,’” says Sister Alfonsina Sanchez, echoing a phrase used to describe her hometown of Azusa, California. A member of the Carmelite Sisters of the Most Sacred Heart of Los Angeles for more than 70 years, she now lives in the community’s retirement facility, just minutes from Azusa.

Born in 1921, Sister Alfonsina is the second daughter of a family that included 10 girls and 8 boys. Growing up during the Great Depression, she often helped her mother with the younger children and particularly with the sewing. Early on, she began to consider a religious vocation, but she was concerned about leaving her family. “I was thinking of becoming a nun, but I was worried,” she explains. “So I started a novena to St Thérèse (of the Little Flower) asking her to decide.” When her family was able to find a home where they would be secure, Sister Alfonsina knew she had received her answer.

She entered religious life on December 12, 1943. During her years of ministry, she served in various roles but primarily as a cook. Since she is quite petite, a special platform was built to make it easier for her to stir the big pots. Sister Alfonsina cooked in what was then her community’s tuberculosis sanitorium as well as in local convents and congregational schools. “I always made a supply of cookies for the sisters, and one Christmas the parish priest asked me to make cookies for the prisoners at the jail,” she recalls. “The men there were so happy to get them.”

Although cooking was a primary responsibility, Sister Alfonsina also ministered in other roles, including as a teacher’s aide. “I enjoyed getting the little children to learn their ABCs,” she says. For a time, she also oversaw the community’s postulants. (Postulancy is one of the initial stages of formation in religious life.) One of the first groups she worked with included Mother Judith Zuniga, who is now the community’s superior general. “Mother Judith always tells me, ‘You were my first teacher,’” says Sister Alfonsina.

These days, Sister Alfonsina’s eyes tire easily when she reads, so she prefers reciting prayers she knows by heart. “I love to pray the Chaplet of Divine Mercy,” she says. “I pray it all the time.” At 96, Sister Alfonsina credits her happiness in religious life to remaining faithful to the lessons she first learned in 1943. “When we were postulants,” she explains, “we were taught that to be worthy of her name a Carmelite sister must be obedient, charitable, cheerful, and prayerful.”