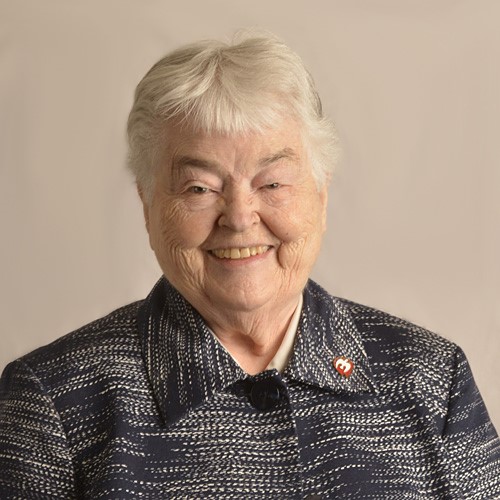 “The love and devotion to Mary is what drew me to this community,” says Sister Barbara Jean Laughlin, 83, a member of the Sisters of St. Mary of Oregon. “I was taught by a variety of communities growing up, but I fell in love with the sisters here. They were so involved with the kids and so happy. Of course, my first inspiration was my dad. Our family would pray together, and he would always pray that one of us would become a sister or priest.”

Sister Barbara Jean entered her community in September 1953, a few months after graduating from high school. “They wanted us all to have our (teaching) accreditation, so I attended Marylhurst College (now Marylhurst University) right away.” After obtaining her degree, she began teaching in rural areas around Portland, Oregon. “My first class had 50 third and fourth graders in the same room,” she recalls. “But my favorite group to teach was the 8th graders. I loved them!” She spent about 30 years teaching at nine different grade schools, simultaneously serving as principal at four of them.

Following a sabbatical in 1984 to study theology in Berkeley, California, Sister Barbara Jean had planned to return to the classroom. Instead she was elected to her community’s leadership council, where she would ultimately serve for a total of 15 years—first as a councilor and later as the community’s superior general from 2000-2010.

During her time as superior, the community took on several major initiatives, including building new facilities for their K-12 school and separately incorporating their sponsored ministries. They also formed an investment committee composed of lay volunteers and sisters to help plan for the community’s long-term needs. “I think I learned more in those 10 years than I did in all my previous years of ministry,” Sister Barbara Jean laughs.

Since 2000, she has been living with leukemia. When she first became ill, her community prayed the Memorare daily. A few months later, a medicine was approved that alleviated her symptoms and continues to allow her to manage the disease. “The Memorare is my favorite prayer,” Sister Barbara Jean explains. “Mary always answers us.” She also lives with three benign brain tumors that were discovered in 2011. (A fourth tumor was removed.) Yet none of these physical challenges slow her down. Though technically retired, she continues in a wide range of volunteer ministries, from serving as the congregational librarian to chairing her community’s wellness committee. For Sister Barbara Jean, a positive attitude and serving others is the secret. “Stay active and reach out to others with a smile and a helping hand,” she says.