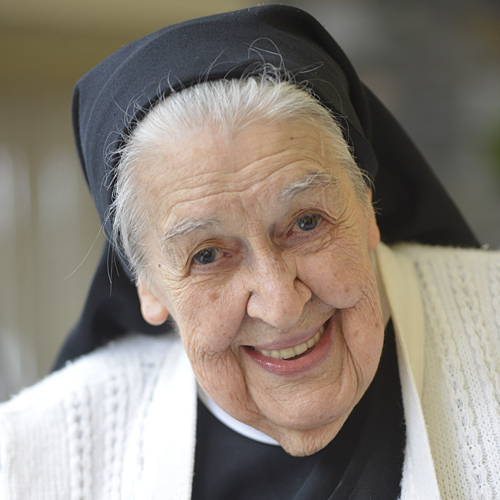 “Forget yourself and just give yourself to God,” says Sister Cecile Jubinville, 97. “Whatever is hard won’t last forever.” A member of the Order of Cistercians of the Strict Observance (known as Trappistines) of Mount Saint Mary’s Abbey in Wrentham, Massachusetts, Sister Cecile has been giving herself to God for nearly 70 years of religious life.

Born in 1920, Sister Cecile grew up in Pawtucket, Rhode Island, where she attended both Catholic and public school. “I started off walking to the Catholic school, which was about a mile away,” she explains. “But after I had whooping cough, my mother switched me to public school because it was closer.”

She attended Catholic high school and was often asked by the chaplain to visit a nearby religious community. At one point, a sister asked her to consider religious life. “I told her, ‘not me,’” Sister Cecile remembers. “I didn’t like their habit.”

Following high school, Sister Cecile worked for several years for a chiropractor. Through him, she met the Trappist monks of what is now Saint Joseph Abbey in Spencer, Massachusetts. At the time, the monks were building the foundation of Mount Saint Mary’s Abbey, the first Trappistine monastery in the United States. “Meeting the monks opened my eyes,” recalls Sister Cecile. “And I knew that was where I was supposed to go.” She was in the first group of postulants to enter the new community and the only one from her group to remain. “It was a hard life, a difficult life,” she explains. “But I was open to it.”

During the early years of the abbey, Sister Cecile served in a wide range of work to help support her community, from caring for cows to baking bread. She remembers when they first started making candy as a source of income. The summers were especially challenging as they worked over boiling pots of caramel. “We would make and wrap caramels by hand,” she explains. “There was no air conditioning.” Today, the community has a modern candy facility. Recently, financial support made possible by the Retirement Fund for Religious has enabled the community to make the facility more energy efficient. The resulting cost savings have increased the funding available for eldercare.

Today, Sister Cecile resides in her congregation’s airy infirmary wing. Along with the rest of the community, she spends time in the chapel throughout the day, participating in Mass and the Liturgy of the Hours. Yet she appreciates the slower pace that life in the infirmary affords. “My favorite part is having the time to read and pray in the afternoon,” she says. Lately, she has enjoyed learning about Saint Josephine Bakhita. “I asked the librarian for a good book,” says Sister Cecile. “I haven’t put it down since.”