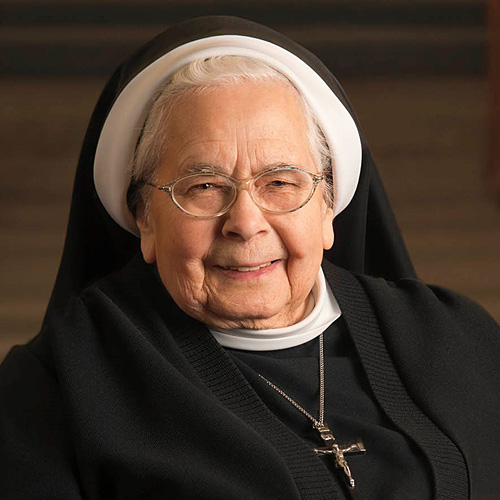 “I loved those little children,” says Sister Clare Vandecoevering, 88, of the students in her first teaching assignment. “They were precious.” A member of the Sisters of St. Mary of Oregon, she spent more than five decades in the classroom. Yet in all those years, her love for students never wavered—a devotion flowing from her deep faith in Jesus.

Born in Verboort, Oregon, Sister Clare is from a devout Catholic family with 14 children. “My real religious vocation came from my father,” she says. “He was very devoted. Every night, he would lead our family in the Rosary.” Growing up, Sister Clare was taught by the Sisters of St. Mary of Oregon, and she had an aunt and several cousins who were members. Together with her father’s example, they inspired her to join the community. Sister Clare also has two younger sisters, Agnes Marie and Ann, who are members. “They both joined, and I didn’t tell them to,” she says. “They just came on their own!”

Sister Clare entered the novitiate on her 16th birthday, finishing high school with her community. Following graduation, an older member mentored her in teaching. “Sister Stanislaus was excellent,” Sister Clare remembers. “She worked with me for a whole year.” After her training, Sister Clare spent five years teaching Native American children on the Grand Ronde Reservation. She then obtained a bachelor’s degree in education at Marylhurst College (now Marylhurst University) and later pursued additional coursework at various institutions, including Mt. Angel Seminary.

For more than 50 years, she ministered at numerous locations in Oregon and Washington, alternating between teaching elementary school and religious education, including adult formation. “I loved religion, so I became a religion teacher too,” she says. Much of her ministry was carried out in her hometown of Verboort, serving at the local parish and Catholic school and living with her two sisters in the convent there. The three spent many summers offering religious vacation school.

“Oh, that was the best thing of all,” she says. “The day we gave out report cards, we’d jump in the car and drive all over Oregon and Washington. We had a special weeklong program. Instead of separating the children by grade, we had them all together. We’d have an older girl between two younger boys, so we didn’t have any discipline issues. We went to places that had never had sisters. We just loved it. It was hard to give that up!”

At age 76, health challenges required her to begin teaching half days. In the afternoons, she would help organize Verboort’s archives.

“Now we’re home here at St. Mary’s,” says Sister Clare, who retired at age 85 and returned to her community’s motherhouse. “It’s a blessing that I have my two sisters here with me, and people are so good to us. So many come around to visit.”

Throughout 70 years of religious life, prayer has been her anchor. “Prayer is very important to me,” she says. “Being with God, being present to him—it’s the main part of the day for me.”