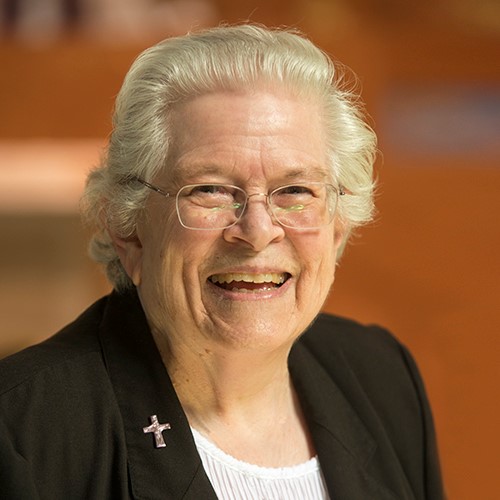 “When I was in first grade, we had a good Irish pastor. He would ask our class who wanted to be a sister, and all the girls would raise their hands,” says Sister Mary Sheila Fay, 84, a member of the Sisters of Notre Dame in Thousand Oaks, California. “From then on, I kept thinking about it.”

In fact, she would contemplate it for the next 16 years. “Most of my classmates who pursued religious life did so right out of high school,” explains Sister Mary Sheila, “but I didn’t feel I knew God’s plan for me then.” After graduating from college with a bachelor’s degree in mathematics, she made her decision. In September 1955, she entered the Sisters of Notre Dame, the community that had been her teachers from kindergarten through eighth grade.

Sister Mary Sheila started teaching the same year. Since her community had very few members with a mathematics background, she was immediately assigned a classroom. For the next 47 years, she taught at the high-school level, specializing primarily in mathematics and often serving as principal at the same time.

She has many happy memories of teaching but recalls one episode with special fondness. At the time, she had three sections of geometry, each with about 30 sophomore girls. “One day the girls were being a handful and teasing me,” says Sister Mary Sheila. “So I asked them, ‘Why are you doing this?’ And they said, ‘Sister, because you love us!’”

In 2002, Sister Mary Sheila retired from teaching and returned to her community’s provincial headquarters, where she pursued various volunteer ministries. Always an educator, she travelled to Poland to teach English as a Second Language (ESL) to religious sisters who were preparing to teach English in their own schools. For many years, she was a reader for Recording for the Blind & Dyslexic, a national library of recordings of textbooks and other resources for persons with visual impairment and certain learning disabilities. Today, she continues to volunteer as a proofreader and as a receptionist for her community. She is also dedicated to praying in her community’s adoration chapel and often reflects on Psalm 107. “Psalm 107 is a reminder—not proof—but a reminder we must trust that, whatever comes along, God is with us.”