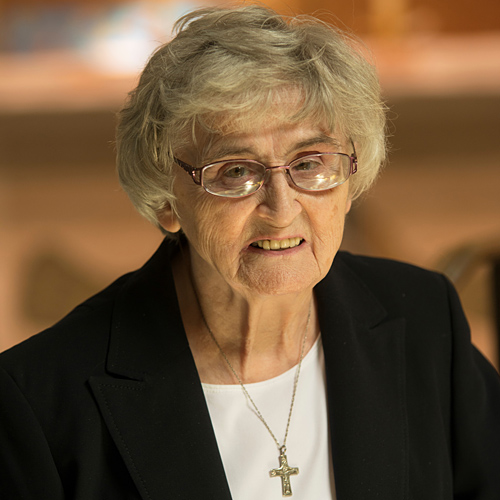 “When I was growing up and on the day of my profession, my aunt—whom I always called Mom—asked me why I wanted to be a sister,” recalls Sister Mary Therese Kirstein, a member of the Sisters of Notre Dame of Thousand Oaks, California. “I said ‘because I love God, and I want to serve him.’” During nearly 70 years of religious life, that is exactly what she has done.

Born in Chicago on March 11, 1930, Sister Mary Therese lost both her parents when she was just a toddler. She and her two brothers grew up in Cleveland, raised by their aunts. There she was taught by the Sisters of Notre Dame for all but one year of her K-12 education. “My mom (aunt) often spoke of the sisters and how much she appreciated what they did.”

Sister Mary Therese entered the novitiate in February 1948, during the second semester of her senior year in high school. “We were postulants when we graduated,” she explains. She would go on to receive a bachelor’s degree in education from St. John’s College in Cleveland and, later, a master’s in education from Mount St. Mary’s.

In 1952, Sister Mary Therese began teaching first grade. She ministered in education for 35 years. For 10 of those years, she served as principal while continuing to teach part time. Following teaching, Sister Mary Therese worked in hospital ministry: visiting patients, bringing them Holy Communion, and serving as a loving presence during difficult times. “I accompanied one young man as he was dying,” she remembers.

Returning to the motherhouse, Sister Mary Therese has contributed to community life in a host of ways, from working on the switchboard to maintaining the flowers in the chapel. “I help whenever and wherever I’m needed,” she says. A highlight of her religious life was the 30-day silent retreat she made as part of her golden jubilee. “The Ignatian retreat was a renewal of my life as a religious,” she says. “It gave me extra time to study my formation and try to improve my spiritual life.”

For Sister Mary Therese, Micah 6:8 and the notion of humble service has been a guiding force of her vocation. “I’ve always appreciated that what the Lord requires is a simple way of life,” she says. She also has a great devotion to her patron, St. Therese of Lisieux, whose “Little Way” continues to be a vital part of her spiritual life.