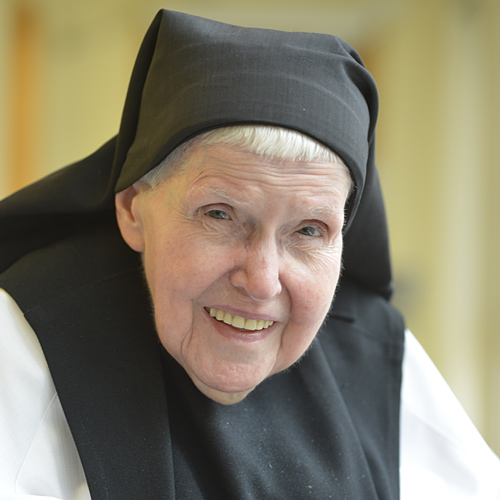 “At 3 a.m., you know that you’re praying for the world,” says Sister Perpetua Wawryk, a member of the Cistercians of the Strict Observance (known as Trappistines) of Mount Saint Mary’s Abbey in Wrentham, Massachusetts. For more than 60 years of religious life, Sister Perpetua has been rising when most Americans are sleeping. “I get up at 2:30 to be in church by 3:00,” she explains. “At 3:20, we begin to pray, and the whole morning is focused on that prayer. It’s the best part of the day for me.”

Born in 1927, Sister Perpetua grew up in North Philadelphia, where her family attended a nearby Ukrainian Catholic Church. She remembers being especially drawn to an image of Our Lady of Perpetual Help painted on one of the walls. “It’s a funny thing; she became attached to me, and I to her. She’s always with me,” says Sister Perpetua, who today carries a picture of Our Lady of Perpetual Help on her walker.

The youngest of nine children, Sister Perpetua worked for many years in the family grocery store. “But I always heard someone say ‘come,’” she remembers. “At 24, I said, ‘Where do you want me to go?’” Shortly thereafter, Sister Perpetua purchased a book by Thomas Merton, a famous Trappist monk, and realized she was being called to religious life in a Trappistine monastery.

At that time, in 1951, the only Trappistine monastery in the United States was the newly established Mount Saint Mary’s Abbey. “When I got here, I worked in the barn right away,” says Sister Perpetua. “It was difficult work, but I persevered.” She explains that the community was very poor then. Making candy, which is now their primary means of income, was begun as one of several industries to sustain the abbey. The candy was made in the basement of the house where the sisters live. Today, the sisters make their confections in a modern candy facility. Financial assistance, made possible by the Retirement Fund for Religious, recently enabled the sisters to install solar panels on the candy factory roof. The resulting energy savings will allow the community to direct increased funding toward eldercare.

After 66 years as a contemplative nun, Sister Perpetua explains that her devotion to the Blessed Sacrament remains the center of her life. “My devotion to the Body and Blood of Christ sustains me,” she says. “My life is very beautiful here.”